Leopard run over by speeding vehicle in Telangana 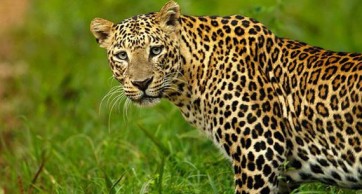 Hyderabad, Sep 15 (IANS) A leopard was killed after being hit by an unknown speeding vehicle in Telangana's Kamareddy district.

It was found dead Thursday morning on National Highway 44 in Daggi forest area under Sadashivnagar 'mandal' (block) of Kamareddy district.

According to the forest officials, the big cat appeared to be between one-and-half years to two years old.

The vehicle hit the leopard when it was apparently crossing the road. The carcass was shifted to the district forest office for post-mortem.

Forest officials said they have registered a case and were trying to identify the vehicle.

Kamareddy and adjoining Nizamabad district have reported similar incidents in the past. Pocharam Wildlife Sanctuary spread over the two districts is known for a wide variety of life, including more than 60 leopards.

Forest officials say due to growing man-animal conflict, leopards are dying in road and rail accidents.

In September last year, a leopard was killed in a hit-and-run case in Mahabubnagar district. A speeding vehicle hit the animal on National Highway 167 near Devarakadra town.

Animal conservation activists have been demanding that the speed of vehicles on highways passing through forests be controlled to prevent such accidents. They have also suggested construction of underpasses and bridges in forests for animals.