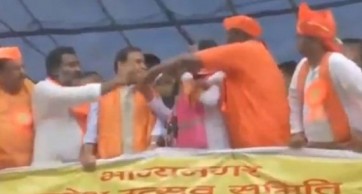 Hyderabad, Sep (IANS) Tension prevailed during the Ganesh procession at MJ Market in Hyderabad on Friday when a Telangana Rashtra Samithi (TRS) leader confronted Assam Chief Minister Himanta Biswa Sarma on the stage and tried to dislodge the mike.

A leader of Bhagyanagar Ganesh Utsav Samiti (BGUS) was addressing the gathering when a local TRS leader stepped on to the stage and confronted Sarma, taking objection to the remarks he made earlier about Telangana Chief Minister K. Chandrasekhar Rao, popularly known as KCR.

The TRS leader, later identified as Nand Kishore, also tried to dislodge the mike. But BGUS leaders caught hold of the TRS leader and whisked him away.

The incident led to tension in the area, which was completely filled with devotees participating in the annual procession. Raising slogans against each other, the BJP and TRS workers nearly came to clashes.

However, the police intervened to defuse the situation. Later, Kishore was arrested and taken to the police station.

The TRS leader was angry over certain remarks made earlier by the Assam Chief Minister against KCR and his family.

He alleged that Sarma was called to create hatred among people. He said the BJP and BGUS leaders are trying to disrupt communal harmony in Hyderabad.

BJP MLA E. Rajender condemned the attempt to disrupt Sarma's speech. He alleged that the TRS is desperate due to fear of defeat in the 2023 Assembly elections.

Every year, BGUS invites leaders of the BJP, RSS or other right-wing groups for delivering the speech at MJ Market, where a special stage is erected to welcome Ganesh idols being carried to Hussain Sagar lake for immersion.

Before the incident, the area witnessed some mild tension when BJP leaders and workers demanded that a flexi with pictures of KCR and state minister Srinivas Yadav be removed. The police had to remove the flexi.

The Assam Chief Minister later addressed the public gathering. He slammed dynasty rule in Telangana and also said that there is no place for Razakars in the country. Sarma said Telangana should move beyond one political family.

He also said that India is becoming a 'Viswa Guru' under the leadership of Prime Minister Narendra Modi.

The Assam Chief Minister also referred to construction of Ram temple at Ayodhya, ssaying, "People used to say Ram temple will not be built, but a temple is being built at the same place where Babar had built a mosque after demolishing a temple," he said.

Earlier, Sarma visited the Bhagyalaxmi temple at Charminar and offered prayers. He wanted to address the people there but the police prevented him on the basis that there is no permission for political speeches.

"We still see pictures of his (KCR's) son and daughter in Hyderabad. The country's politics should be free from dynasty rule," he added.

Sarma said a government should be for the people and not for a family.