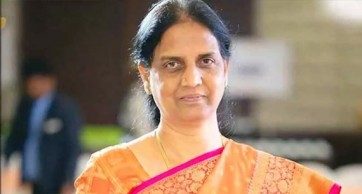 Hyderabad, June 21 (IANS) Students of Rajiv Gandhi University of Knowledge and Technologies (RGUKT) in Telangana's Nirmal district called off their week-long protest after education minister P. Sabitha Indra Reddy gave an assurance that their problems will be solved in a phased manner.

The breakthrough came in the early hours of Tuesday after the minister held talks with the protesting students at RGUKT, popularly known as IIIT Basara.

The students announced that they will resume attending classes from Tuesday as the minister has given the assurance that all their demands will be met in a phased manner.

They had been demanding appointment of a regular vice chancellor and improvement in quality of food and other basic amenities.

With the students insisting for an assurance from the chief minister's office or the minister, Sabitha Indra Reddy rushed to Basara from Hyderabad on Monday.

The minister first held talks with the officials, who briefed her on the students' demands and the progress made in the talks held with them by the collector and director.

After the talks, the students said they were satisfied with the assurance of the minister to address their problems in the order of priority.

The students decided to call of the protest and resume attending classes.

The district collector said Rs 5.6 crore will be released immediately to the institution.

Earlier, students continued their protest for a seventh day on Monday to press for their demands.

Braving rains, they continued the sit-in at the main gate of the building.

The talks held by district collector andA director till early Monday morning failed to break the deadlock as the students insistedAhat a statement be issued from the chief minister's office or education minister Sabitha Indra Reddy or information technology minister K. T. Rama Rao give a written assurance to solve their problems.

The students have complained that the food being served in the hostel mess is of poor quality. They alleged that on several occasions, small insects and frogs were found in the hostel food.